Cups and Trophies and the Victor Ludorum 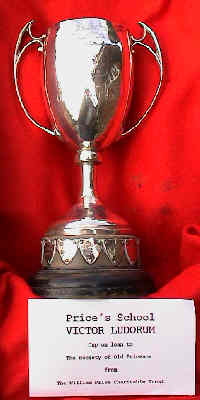 Dusty Titheridge raised a couple of points which Members might be able to help clarify:

I viewed the trophies picture and noted one in memory of Ian May. I am sure
he was in my class. I had no idea that he had been killed in Italy. Do you
know in which service he served? I think he was one of Thacker's top students.
I am sure the Victor Ludorum Cup was contested in my day but I have
forgotten its purpose. Were the recipients names engraved?

According to the War Graves Debt of Honour it appears that it may be:

The Royal Palace at Caserta served as headquarters for the Allied armies in Italy for the greater part of the duration of the Italian campaign. The site of the Caserta War Cemetery was chosen in April 1945. Some of the graves here are those of prisoners of war, some of men who died in hospital here; No.2 British General Hospital was at Caserta from December 1943 until September 1945. There are also a few burials resulting from the fighting in the middle of October 1943, on the River Volturno, which lies not far away to the north. There are now nearly 800, 1939-45 war casualties commemorated in this site. Of these, over 10 are unidentified.

Do you know anything more? Does anyone have any recollections of those who were lost in the War? I'd like to add anything we may have to our Web site.

What was it for? Did you win it? I have it now - the only cup in the control of the Society.

That is quite a cluster of silverware. Why not try to picture them
individually?

The picture came from the Trust and we had no control over it.


Members were quick to put the record straight:

I think the Victor Ludorum cup was for the best and brightest pupil with the best scores for exams each year. I never won it because I was a complete dunce and was regularly last in every subject!

Very pleased to get the info about May.
I think Victor Ludorum was awarded to the best all round student combining
athletic prowess with academic pre-eminence.
Surely Roy Daysh or Tom Hilton would be able to provide more info.

Malcolm Paskins, with the help of Richard Bridgland wrote:

We have the answer!
The 'Victor Ludorum ' award was threefold, one each for the best Minor,
Junior , and Senior boy in the Summer Sports Day. I have no idea how it
was
calculated, presumably on some sort of points for places basis.
In summer 1960, Jim Brammer won the Seniors trophy. He also won the 'Iain
May
Cup' for the High jump (although the September 'Lion' mis-reported it as
being for the Long jump!)
Best regards
Dickie B

If memory serves me correctly the Victor Ludorum was awarded on Sports Day to the athlete who acrrued the highest points total across all events.

Michael - I recently spotted your correspondence about 'Victor Ludorum' and showed it to my brother Ken who asked me to send you this:
"I was very interested in your Victor Ludorum piece. I was the Victor Ludorum in 1945 and 1946 ( the year I left the school). The award was made for being the top scoring pupil on the Annual Sports Day and was awarded, as I recall, in three classes. Quite how the points were made up I never enquired but I recall one year winning the 100 yards, the cricket ball throw (131 yards), coming second in the long jump - and also I think being in a winning 440 yards relay team.
The cup base was endorsed with the names of the winners - although I don't recall any previous or subsequent names."
Ken Sapsed

( I should perhaps add, Michael, that Ken was at the school from  1942 to 1946.
I was also at the school in 1945-46, but only briefly, as the family moved to Portsmouth when Dad, who had been the station sergeant at Fareham Police Station, retired to be a publican.)
Regards
Gordon Sapsed