The Society received an Internet tip-off from a visitor and well-wisher to our Web site, Barry Miles, not an OP but a fellow Grammar School boy, that our old drum was being offered for sale by a shop in Cornwall.

Michael Bayliss recalled having "played" it in the past and has now purchased it. He writes: 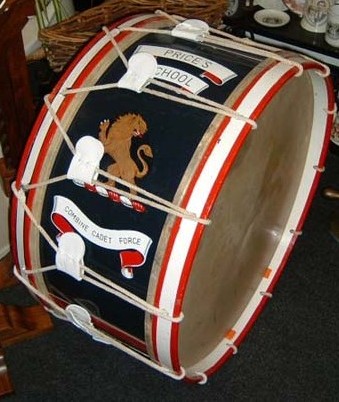 I have now purchased the Price's CCF band bass drum. To save my phone bill, herewith attached to one message is a pic. of it I received from the vendor for (a) the OPs website, (b) our 'investigative agent' Barry, to whom many thanks. You may be interested to know that the only other bidder was Bob Gilbert, who for some years has been living in Bangkok. He and I were exact contemporaries at Price's (1958-65) and both played in the CCF band. I didn't even know he was in contention for the drum until after I had bought it, and the chap selling it did not of course know we were acquainted until then.

The instrument has evidently had a 'paint job' at some point, as Bob G. and I both recall the lion on the crest having in our day been the proper blue and silver, not the sandy colour in the photo. I also don't recall that

grammatical error on the front: "combine (sic) cadet force". I hope it is still playable after all these years - it has been used apparently as an occasional table, with a detachable glass top! It looks in good nick in the photo, but it won't be delivered to me for another week, so I can't tell yet. Although not a drummer, I was a tall lad and was on occasion roped in when no-one else was available to play the thing, complete with leopard-skin apron. (And where did *that* go to? It was a real one, and presumably valuable. And, for that matter, what happened to the side drums and drum major's mace?) I think it must have been on my slender qualification as Temporary Acting Bass Drummer that I was later appointed for a period as Drum Major simultaneously with being the Band Staff Sergeant!

So - perhaps we could have a reunion some time with said drum? I still have my old fife (which I can still play!) and it occurs to me that there are a quite a few ex-Price's bandsmen in the OPs whom we could get out of retirement for "the final CCF band parade of all time"! If the Committee is going to be discussing 'themed' events, you might wish to bear this in mind.