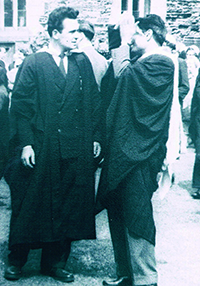 Rodney Porter was born in 1935 and attended Price's School from around 1944 to 1953. He was at first a boarder, sleeping in dormitories at the back of the headmaster's house, the same rooms where I was taught some fifteen years later, often by the same teachers, for I too was a Pricean from 1957 to 1962.

Rodney excelled in scientific subjects and was also a keen sportsman. He obtained badges in athletics and cross-country running as well as medals from the Royal Life Saving Society and the Army Cadet Force. He played both bugle and trumpet and enjoyed jazz music, even starting a university jazz band!

He later won a prize as "best all round electrical fitter apprentice". On 3 July 1959 Durham University awarded him a B.Sc. in Applied Science, having qualified in Mechanical Engineering. That same year he was at his peak socially and was also engaged to a girl called Penny.

Then on 28 July 1959 tragedy struck. Riding his motorbike to his first job in Bristol, he slid on a patch of oil, crashed and died the next day. This proved a terrible blow for our family and friends. His funeral was held at Trinity Church, Fareham and fifty years later I asked for him to be mentioned in a Service there.

Sadly Rod's death was ignored by Price's School, for it had occurred during the holidays and soon after the retirement of Mr. Ashton, the headmaster who would have known him. Only one teacher responded, spotting his obituary in a local newspaper and then briefly speaking to me in a busy corridor.

Years after I became a librarian, obtaining a B.A. in Information Management and later a B.Sc. in Health & Social Welfare. The latter included a section on "Death & Dying" that featured bereavement and grief studies in which we learnt about the importance of socially acknowledging a death. 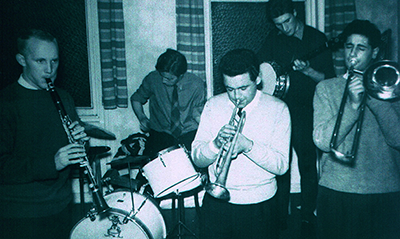