The Society was invited to contribute towards the Henry Cort project to provide a drinking fountain near to the orginal site of Price's School.
Here is the report and photographs taken in 2000....

At the invitation of Councillor Roger Price. J.P., Mayor of the Borough of Fareham president Patrick Nobes and I attended the official opening of the Henry Cort Millennium Project in West Street, Fareham on the morning of 8th April 2000 as representatives of The Society of Old Priceans.

The occasion was blessed with brilliant sunshine and attended by about 100 persons.  A guard of sailors from HMS Collingwood assembled and was presented to the principal guest, Mrs. Mary Fagin J.P., The Lord Lieutenant of Hampshire. 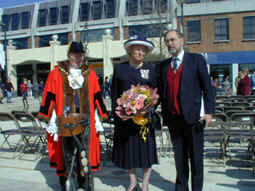 She inspected the guard of honour and a march past followed with swords drawn and bayonet fixed.  HMS Collingwood was presented with the freedom of the Borough on 3rd April 1975.

The official unveiling of a memorial plaque followed the march past by Mrs. Mary Fagin.  The exhibition of sculptures was declared open.  It is the biggest outdoor ironwork exhibition in the world and is expected to attract visitors from far and wide.

The Society donated £500.00 towards the cost of the water fountain and a memorial plaque with raised lettering is now an integral part of that feature.  A photograph of the plaque is in the archives and on the Society web page.

The opening was later followed by a civic luncheon in Ferneham Hall when guests were honoured also by the attendance of all ironsmith artists responsible for the exhibits.

Interestingly, the president and I met with Brigadier Paul Cort, a direct descendent of Henry Cort in whose honour this permanent exhibition has been arranged.

The installation of the plaque in such a conspicuous location so close to the site upon which the original school was founded gives a further permanent reminder to the Borough of William Price and his continuing educational legacy.