David Goldring writes about the CCF and Band: The set of Price’s CCF photos enclosed with this contact cover the 6 years I was in the Band, with some extras.

In some cases names now elude me and so, if you know whose name is missing, please get in touch. For some, the CCF years were not the best loved times of their lives, but for others, it was an enjoyable part of life at Price’s and I enjoyed all my years in the Band, functioning in all sections in over 50 formal Parades. The many who spent time in the Band also, their time and effort, reliability and willingness to improve made the Band a well-performing unit, most of the time.

I have seen a lot of Youth and Cadet bands in recent years and only when some gather together does the overall performance look good. Mostly, they are small. That is not to criticize other Bands, but is a reality of modern times. The uptake of instrument playing has declined a lot. But we had good numbers and made a decent effort to look smart.

As I grew older, it was my task every now and then, to have to tighten the ropes of the drums in order to get a decent playing surface, as well as clean my own. Modern Drums are much easier to care for, and they are lighter, too. As a young lad, I looked up to the seniors and they acted a role model throughout. We were left largely to our own devices at band Practise nights and on Parade. Seldom had the company of an Officer or the occasional Bob Jarman.

Looks like a General Inspection Parade , in 1968 , after my times (55-62). Notice how slim everyone is cf an equivalent group today! Names for the 8 visible faces? 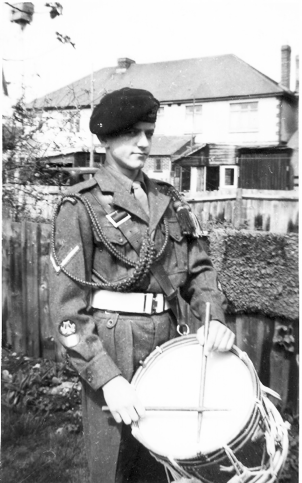 I think this was my first Parade - Sunday 24th February, 1957, West St., Fareham. Baden Powell Centenary Parade. Can any one fill in the missing names? 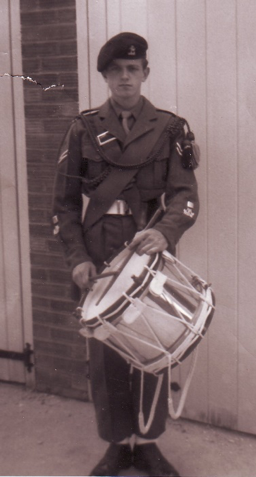 Myself in 1958, 1959 and 1962. Modern drums do not have the brass shells and are much lighter, also with screw-tension fastening cf the rope-tensioned  drums like this.

I think the front row of drummers was: myself, Spud Tanner, and ? to the right of the Bass Drum is Hugh Roddis, I think. C. 1958? Wherabouts? 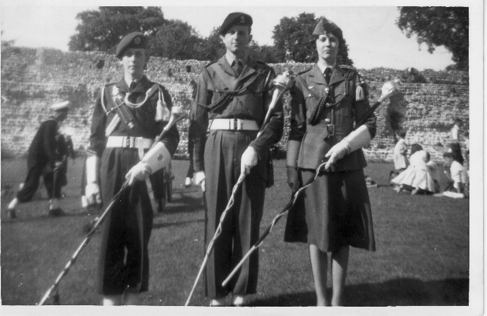 At the 1962 Portchester Gala, along with 2 other ACF bands, but we didn’t play

Does anyone know what happened to the Mace? It would be good to hear from any former Band members, and especially from former CCF members who made the Services an important part of their later life. Think of writing a simple CV and attach a picture of your Price's years and of you later in life.