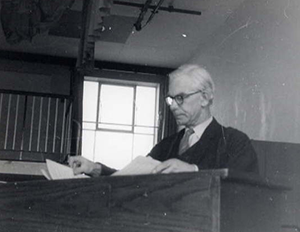 Michael, It is somewhat of a surprise to see Mr Smith (nickname Smudge) among those listed of which little is known.

Please feel free to use any of this memoir.

== On arrival at Price's, on our very first day in September 1954, we the new boys, were retained in the Hall, where we stood patiently to be divided into two classes 2A and 2B. The Headmaster Mr Ashton was there with his deputy Mr Shaw and two prospective form masters, one a somewhat gruff looking untidy man, Mr Smith, and the other a rather dapper, somewhat younger looking, man who was smiling and appeared friendly, Mr Garton.

To a boy, I feel sure we all hoped to be assigned to Mr Garton. However since my surname was near the start of the alphabet, I was assigned to Mr Smith. Any disappointment I may have had evaporated quickly over the next few days because we soon found out that Mr Garton was a strict disciplinarian who seemed to hold all boys in withering contempt.

Mr Smith on the other hand was a very friendly and kind man. Too kind in fact because the class played him up a lot and got away with it. He taught mathematics but was not a particularly inspiring teacher although undoubtedly did his best. When he turned to the blackboard, paper aeroplanes would frequently descend on to his gown. His gown of course was very chalky as indeed was he.

His best attempts to achieve discipline were to bang his desk lid, shouting over the din in his gruff voice: "If I have to bang this desk lid you will all stay behind for 5 minutes!" Bang - chaos continued "Right! If I have to bang the lid again you will stay behind for 10 minutes" again chaos continued but eventually things quietened down. At the end of the lesson, when the bell went, he would invariably have forgotten what he had said and we would all leave.

He had a distinctive walk in which his right leg seemed unable to bear his weight so that he dropped down on that side. His brief case which he always carried would then almost touch the ground. I remember on one occasion some boy had vomited in the corridor and Mr Smith oblivious to this fact made his way down. Whether there was a tide mark on his brief case or whether this is my imagination, I cannot with any certainty say.

I once has the temerity to ask Mr Thacker during a informal class gathering, when we were talking about various masters, if he knew whether Mr Smith had been injured during the war and that had resulted in a leg injury. Mr Thacker replied that if I wished to know that, I should ask Mr Smith himself but he left me in no doubt whatever that it was none of my business and, quite correctly, indicated that it was impertinent of me to enquire.

I think Mr Smith was a very kind person and we were all lucky to have him as a form master and I regret that we didn't value him then as much as we should have done. ==