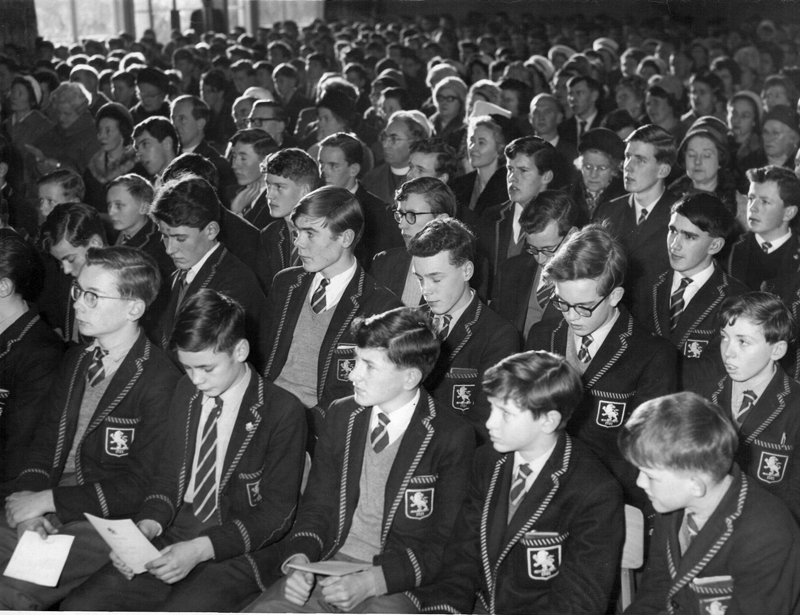 Yes, it was me at the end of the row (bottom right), sitting next to Johnny Brookes. I never knew why we called him Trog, but then again why was Trevor Marlow called Tank or Tug? Well if he was playing on the other side at rugby you soon knew when he tackled. John Mitchell gave a great overview of that event. I was in the naval cadets and reached the rank of CPO by default and was also a First Class shot and knew how to press and wear the uniform correctly.

That process was highly symbolic and related to Nelson, the “Immortal Memory”. The black silk neckerchief was apparently still worn as mourning for his regrettable demise. Actually, there is a plaque on the deck of HMS Victory which states “Nelson fell here” and I’ve tripped over it as well. I didn’t accompany John on the voyage to Scotland but we did something else very exciting together. During the Spring Equinox gales, the Navy took a lot of cadets out for the day in a flotilla of 3 Leander-class frigates, escorting the cruiser HMS Tiger (or one of that class). The weather was bright and rough and it was only when we rounded the Nab Tower that it became even more lively! Our flotilla was strafed by Blackburn Buccaneers and hunted submarines and fired 400lb depth charges from its Limbo mortars and then finally the big 4.5” guns. The mortar fired something like an old-fashioned dustbin high into the air and it fell silently, splash, into the sea. A few seconds later, that bit of sea erupted with a roar and then a few seconds the concussion wave hit the ship with a big hammer and we all jumped up off the deck and the crockery in the mess did the same. It was a fabulous day out and they fed us well. All this for for 1/-.

In 1969, I went up to UCL to read Biochemistry and my Price’s friend Tony Roberts (AN Roberts) started medicine at the same time. Because I’d been accelerated two years I took A Levels at 16 in 1968 and spent (what we now call a Gap Year) my 17th year trying unsuccessfully to get into Cambridge and then working at the Ultra TV factory.

In the photo, the man on the right could have been me (but wasn’t) and 40 times each hour I would collect a TV from another line, carry it to the end of mine, collect a circuit board and switches from another line and then screw in the channel selector and tuning switches with a pneumatic nut-runner before sending the set down the line.

On arriving at UCL I was incredibly fit and relatively rich (see photo)! Tony and I had taken his A levels at the same time as me and we enrolled at the same time. How so? Well he had spent his Gap Year in the Falkland Islands with VSO. Another Price’s friend, Brian Kellett, studied Oceanography at Swansea and did his PhD with the British Antarctic Survey. I now work 1 day/week at UCL as Professor in the Division of Medicine and research and teach the dark side of nutrition. It has been a very interesting career in clinical research and its taken me around the world.

One of my best memories was to spend 3 months in Bangladesh with WHO to help the government set up a salt-iodation project to combat the terrible iodine-deficiency goitre which affected 1 in 10 of the population overall, and 90% in the northern regions. This program has been very successful and in 30 years has reduced the incidence to less than 3%. This may not sound like much but this simple programme has spared tens of millions of people this crippling condition. I’ve attached a photo to give an idea.

I enjoyed Price’s enormously even though the 5 mile bus-ride in from Gosport could be a bit of a trial on a wet Friday. It gave me a great education and so many of the teachers were outstanding.

One who inspired me was Dr Smith (he appears in one of the photos in the newsletter) who brought a breath of modernity and fresh air to chemistry. He was mild in character and drove a Fiat 600 Multipla which was small enough for some of the larger 6th formers to lift out of the car park onto the plaza in front of the “new” School Hall. He also demonstrated chromatography which revolutionized my PhD studies and I even used it as a lab technician at Haslar Hospital one summer, to measure hormones in samples from sailors on long voyages in nuclear submarines.

I hope this memoir helps John Mitchell to whom I send best greetings.